Well, we are now five days into our South African adventure and majority of us have the sunburns to prove it. Temperatures here have been staying around and over 80 °F with plenty of sun, but at least we escaped the heaping piles of snow and subzero temperatures at home!

We started off the day leaving our hotel in Centurion and headed North West to a smaller town called Wintersveld. From Wintersveld, we traveled the red dirt roads to take us deeper into the countryside to attend a program. The program was co-hosted by The Gauteng Department of Agriculture and Rural Development group and was focused around showcasing the operations of emerging farmers.

We started out the program by visiting a mixed livestock farm that had goats, sheep, chickens, and cattle. A representative from the Department of Agriculture presented on the functional efficiency of beef cattle and followed his talk with demonstrations. Using a yearling bull, he demonstrated how to take body height measurements and ultrasound scanning for carcass quality measurements.

For the second half of the program, we visited Prudence Egumbo, who is another emerging farmer. Prudence shared with our group how she was nominated and then was named the emerging farmer of the year by Animal Research Council of Gauteng Providence. Prudence took over her grandfather’s farm in 2010, and is currently working with a cattle herd of 73 head, around 50 sows, and chickens. An interesting management practice used by farmers in this area, such as Prudence, is communal grazing of their cattle.

After our farm visits, we traveled back to Pretoria to see the Union Buildings. These buildings are where the South African Parliament is located. There is a statue of Nelson Mandela located in front of the buildings. This trip was not planned as our bus driver insisted we go see it. It was a joy to see how proud he was of his former president and his country and to be able to show us a part of his heritage. 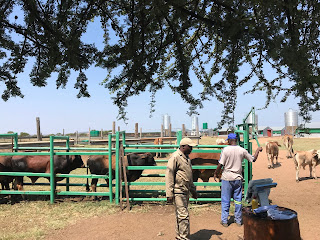 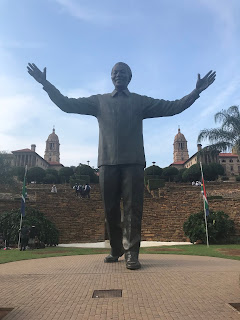 The statue of the famous Nelson Mandela at the Union Buildings in Pretoria. 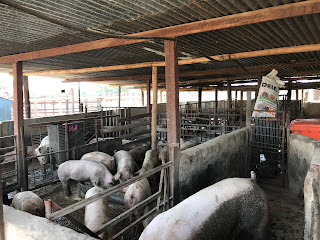